Dreamworks Animation Wiki
Register
Don't have an account?
Sign In
Advertisement
in: Stub, The Croods Characters, Villains,
and 12 more

The Monster
The Spiny Mandrilla is the main antagonist of The Croods: A New Age. It is a hybrid primate that's part spiny echidna, part gorilla and part mandrill. He is the leader of the Punch Monkeys.

The Spiny Mandrilla is a truly evil, monstrous and tyrannical apex predator that enslaves and tortures the Punch Monkeys and other creatures to do his bidding. He is the largest and most powerful creature in the Croodaceous period and is also the most dangerous apex predator in the world. The Spiny Mandrilla is highly ruthless, gluttonous and bloodthirsty as he eats other creatures (especially the Punch Monkeys) that fail to bring him back any food. He shows signs of cannibalism as he would also like to eat humans, cavepeople, apes and monkeys just to satisfy his appetite. The Spiny Mandrilla doesn't tolerate failure and would devour his subjects if they don't bring him any bananas. He is also extremely greedy, egotistical and selfish as he doesn't care about anyone or anything but himself.

Spiny Mandrilla is a enormous primate who is the hybrid of a spiny echidna, a silverback gorilla and a mandrill.

The Spiny Mandrilla has colossal strength. 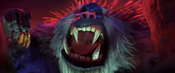