Dreamworks Animation Wiki
Register
Don't have an account?
Sign In
Advertisement
in: Spirit: Stallion of the Cimarron, 2000s films, Movies,
and 4 more
English

One night, the stallion notices something unusual in the distance and decides to check it out. He comes across a group of humans and their horses camping in the forest. The stallion has never seen humans before, and when he sticks his nose in a boot, he throws it off, which lands on one of the campers, awakening him. He awakes his comrade, and they tend to capture the stallion. However, the stallion runs off, and the humans follow pursuit on their horses. The stallion leads his herd to safety and runs off to lead the riders in another direction. Unfortunately, the stallion gets captured and is taken to a US army cavalry fort in the desert.

The stallion is loaded into a boxcar with some of the Lakota's horses, but he is heartbroken over the loss of Rain. During the trip, the stallion sees the apparitions of his herd, and he joins with the other horses. The train arrives at the Transcontinental Railroad work site, where the stallion and numerous other horses are put to work in pulling a steam engine over a mountain. Once the stallion reaches the top, he realizes that the railroad is heading towards his homeland, and he stops, causing the other horses to stop. He then pretends to be sick and collapses. When he is taken away, he frees himself and kicks the chains that hold the horses to the engine, freeing them. However, the engine starts to tumble, and the stallion hurries off back to the worksite. The engine crashes, and an explosion rips through the worksite. The explosion causes a forest fire, and the stallion rushes to safety. The chain around his neck gets caught in a stump, but Little Creek arrives and frees him.

The stallion discovers that Rain is actually alive, and the two rejoice over their reunion. Little Creek bids farewell to Rain and to the stallion, named "Spirit-Who-Could-Not-Be-Broken". Spirit and Rain return to the herd, and they celebrate his return. The last scene features Spirit and Rain on a hill, overlooking the herd as they graze. 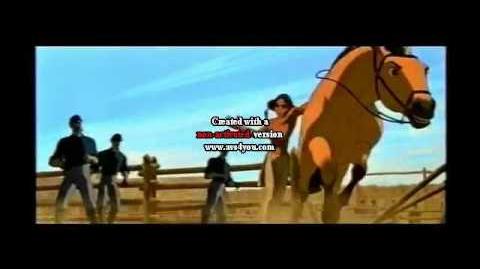 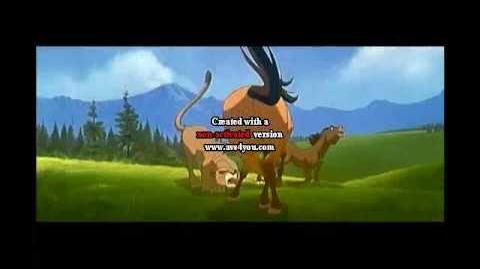 Spirit Stallion of the Cimarron