watch 03:27
Wiki Targeted (Entertainment)
Do you like this video?
Play Sound

"Neigh!"
Spirit Jr. is the pet of Lucky, the son of the legendary horses, Spirit and Rain and the grandson of Esperanza.

Spirit Jr. attributes much of his physical appearance to his father, Spirit. He has a buckskin coat, black markings on his legs, a dark muzzle, a light brown mane and tail, and brown eyes.

His defining mark is the blaze on his face, which he inherited from his mother, Rain.

Much like his father, Spirit has a headstrong and courageous nature. He loves to run with his herd and being out in the wilderness when not accompanying Lucky on one of her many adventures.

Due to him being a wild horse, he does not allow any men to touch him; an exception is Lucky's father following their treasure hunt adventure in "Lucky and the Mysterious Map".

Despite all this, Spirit is a very caring and loyal horse exept to his heard whom he often neglects. His intelligence and knowledge of the frontier proves very useful on his adventures, leading Lucky to trust his instinct over her own even though she can't control where he goes. Spirit cares greatly for Lucky to the point that only she is allowed to sit on his back, and he will come to her aid whenever she needs his help, often leaving his heard in the process.

Spirit's care and concern for Lucky is demonstrated several times throughout the series, such as when he leads the group on a different path out of the canyon to escape the dynamite for the railroad, and when he begins lifting one of his front legs for Lucky to use as a way to get on his back when there are no fences or rocks to use. Another example is when Smoke challenged Spirit for leadership of the herd and when Lucky came over, he charged at her; Spirit protected her and in that moment, he chose Lucky over his herd. 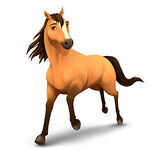 Add a photo to this gallery
Retrieved from "https://dreamworks.fandom.com/wiki/Spirit_Jr.?oldid=141898"
Community content is available under CC-BY-SA unless otherwise noted.