Spooky Jack was a cancelled DreamWorks film with a scheduled release date of September 17, 2021.

The story follows three siblings who move into an eerie new home and discover that all the creatures we’ve been told don’t exist actually do. They must handle some unusual squatters from mischievous leprechauns and the elusive Big Foot to a shy Boogeyman that won’t stop going bump in the night.[1]

On September 19, 2017, DreamWorks announced an original feature called Spooky Jack, with a planned release date of September 17, 2021. Jason Blum would served as executive producer, and would've been a co-production with Blumhouse Productions. The premise would've been about three siblings who moved into a eerie new home and discover that all the creatures we’ve been told don’t exist actually do.

On October 7, 2019, Spooky Jack was removed from the schedule, with its original release date replaced by The Bad Guys, based on the Scholastic book series by Aaron Blabey.[2] 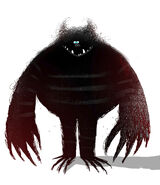