watch 01:45
The Loop (Movies)
Do you like this video?
Play Sound

Steve Carell (born August 16, 1962) performed the voice of Hammy in Over the Hedge. He is well known for his portrayal of boss Michael Scott on the NBC sitcom The Office (2005–2013), on which he also worked as an occasional producer, writer and director.

Carell was nominated as "America's funniest man" in Life magazine, and received the Golden Globe Award for Best Actor – Television Series Musical or Comedy for his work on the first season of The Office. In the 2010s, Carell received attention for more dramatic roles. His role as wrestling coach and convicted murderer John Eleuthère du Pont in the drama film Foxcatcher (2014) earned him, among various honors, nominations for the Academy Award for Best Actor, the Golden Globe Award for Best Actor – Motion Picture Drama and the BAFTA Award for Best Actor in a Supporting Role.[4] He also received acclaim for his roles in Little Miss Sunshine (2006), The Big Short (2015), and Battle of the Sexes (2017), the latter two earning him his eighth and ninth Golden Globe Award nominations, respectively. In 2018, he re-teamed with Anchorman and The Big Short director Adam McKay for the Dick Cheney biopic Vice, in which he portrayed Donald Rumsfeld, and played journalist David Sheff in the drama Beautiful Boy. 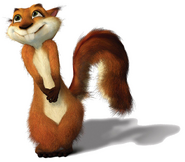 Hammy from Over the Hedge
Add a photo to this gallery

Retrieved from "https://dreamworks.fandom.com/wiki/Steve_Carell?oldid=138219"
Community content is available under CC-BY-SA unless otherwise noted.