"I'm glad Shifu sent you. I was beginning to think I'd been forgotten. Fly back there and tell them the real Dragon Warrior is coming home."

“'He wanted the Dragon Scroll. But Oogway saw darkness in his heart and refused. Outraged, Tai Lung laid waste to the Valley'”
―Tigress explaining Tai Lung's background to Po[src]

Prior to the franchise, Tai Lung was an ordinary leopard who loved Shifu and Oogway like his own family until one day, he was denied the Dragon Scroll by Oogway; plus, Shifu couldn't bring himself to speak up in Tai Lung's defense, which shattered him and made him destroy the Valley of Peace and try to take the scroll by force. After knocking Shifu out of the way and breaking his hip, Tai Lung leaped for the Dragon Scroll, only to be stopped by Oogway jabbing him in the chest. Afterwards, he was sent to Chorh-Gom Prison for 20 years. After his escape, Tai Lung once again tried to take the scroll, but he was defeated by the true Dragon Warrior, Po, when he used the Wuxi Finger Hold on him.

In the Legends of Awesomeness episode "Master and the Panda," Po disguised himself as Tai Lung to convince his nephew Peng that he wasn't evil after tempting him, to which he refuses and fights his uncle for it.

Tai Lung's parentage remains a mystery, but it was hinted that he has either a currently alive brother or sister who parented a kung fu fanatic named Peng. All that is known about him is that he was left on the doorstep of the Jade Palace as a cub, and taken in by Master Shifu, who decided to raise the snow leopard cub as his very own son. When Tai Lung began to show a natural talent in Kung Fu, Shifu jumped to conclusions and was even more convinced that a child so talented but had no proper training was a sign telling him that his adoptive son must be the Dragon Warrior foretold in legend. Tai Lung began training with Shifu, who filled his head with the thought that he was the real Dragon Warrior.

As the leopard cub grew in age and skill, he became proud and overly confident in his own abilities, having mastered Leopard Style Kung Fu and advanced techniques such as nerve attacks, as well as all one-thousand scrolls of Kung Fu. Despite his accomplishments, Tai Lung still grew in desire for the power of the Dragon Scroll and wanted nothing more than to be the Dragon Warrior, but made the mistake of directing his whole life to the getting of the Scroll, since Shifu made the mistake of encouraging it. When Shifu thought he was ready, Tai Lung was brought before Grand Master Oogway to be tested whether he was fit to be the Dragon Warrior, but since Tai Lung's overwhelming pride and lust for power alerted him of darkness in the leopard's heart, Oogway refused him the title. Feeling his dream slipping through his fingers, Tai Lung desperately turned to Shifu, but the latter wouldn't help since he couldn't bring himself to object Oogway's decision.

Confused and outraged, the darkness that had been contained his whole life filled Tai Lung as he laid waste to the village down in the Valley of Peace, cutting a destructive massacre in his fury before charging back to the Jade Palace to try and take the scroll by force. Shifu charged to stop the monster that he had created with a direct attack, but hesitated since he couldn't destroy his very own adoptive son. Tai Lung, however, didn't even hesitate as he was still furious that his master let Oogway' decision stand, and knocked the red panda aside, shattering his hip. Before he could claim the Dragon Scroll, Oogway caught Tai Lung in midair with a nerve attack and jabbed multiple pressure points in his chest. Shifu watched in horror as the warrior he'd raised and trained fell unconscious before him. Ashamed at his talented student's actions, he and Oogway shipped Tai Lung off to Chorh-Gom Prison as punishment, where he was chained and fitted in a restraining tortoise shell with various acupuncture needles in crucial places along his back, making him almost immobile and his abilities blocked. Shifu, on the other hand, became left with a hole in his soul of having let the love for his greatest pupil get wasted that he started training the Furious Five in a more harsh and critical manner.

Over the next 20 years, Tai Lung's time in Chorh-Gom was hardly wasted, and he spent them formulating a scheme to escape and take what was "rightfully his", the Dragon Scroll. But he waited for the opportune moment. One day, a messenger goose named Zeng came to the prison with news that the Dragon Warrior was to be chosen, and since Oogway foresaw that it might attract Tai Lung's return, the goose asked Commander Vachir to double the guard. Tai Lung knew that it was now or never. Using a feather shed from Zeng, Tai Lung unlocked his chains and leaped up to the entrance, scaling up huge boulders and destroying the Anvil of Heaven. He sent Zeng back unharmed to tell the world that he was free and coming home.

Journey back to the Jade Palace

With the breakout and message done, Tai Lung started the long journey back "home" to the Jade Palace. Along the way, he learned from passerbys that the Dragon Warrior Oogway chose dropped out of the sky on a ball of fire, and that he was a warrior unlike any the world had seen before. To the leopard, the warrior in question sounded like a worthy opponent and went on his way back to the Valley to face him, only to delayed by the Furious Five, who cornered him on a rope bridge that was cut and had to be supported by three members of the team. When Tai Lung demanded to know where the Dragon Warrior was, his adoptive sister Tigress implied that it was her. But this made her adoptive brother laugh and tell her and her teammates Monkey, Mantis, Viper and Crane that he was pretty sure the Warrior wasn't one of them, adding in what rumors he heard. Shocked, Monkey accidentally let the fact that the Dragon Warrior was named Po slip from his tongue, to which an intrigued Tai Lung declared that he would finally have a worthy opponent for a legendary battle. A provoked Tigress took him on with other members of the Five until only Mantis was left supporting the bridge. Tai Lung was overwhelmed by the team's combined skill and teamwork, and found himself wrapped in rope from the bridge's remains and left to fall into the mist below. However, he managed to use the ropes swing up and break free, proceeding to knock the Five out (except Crane so he could bring them back to the palace as a special warning) with a nerve attack before continuing his journey unhindered.

Tai Lung returned to the Valley of Peace to find it evacuated, but Shifu was still at the Jade Palace. Angered, he proceeded to beat Shifu senseless as the red panda tried to make Tai Lung redeem himself by saying his own pride blinded him to what the leopard was becoming before it was too late, and what he was turning him into. He finished with a sincere apology, but after a few seconds, but Tai Lung decided to harden his heart and still demanded the scroll. When he saw that the Dragon Scroll was gone, he demanded to be told where it was, and Shifu said that it was halfway across China and that he'll never have it. In his rage, Tai Lung began to strangle his old master and prepared to kill him with his sharp claws. But before he could, Po appeared at the doorway, bringing the leopard's attention toward him. Now amused and incredulous to see the Dragon Warrior Oogway had chosen was a "big fat panda", Tai Lung tossed Shifu aside and taunted Po by asking if he was gonna sit on him, to which Po replied, "Don't tempt me" (but at one point, he accidentally did just that).

Po and Tai Lung fought over the Dragon Scroll, which was with the panda. The leopard, on the other hand, found the fight at first challenging, and Po used his bulk to his advantage. Several times, Tai Lung was thrown into the air, but he secured the Scroll after knocking Po to the ground and defeating him. He opened it while relishing at finally having his hands on it, but was shocked to see nothing except it being blank. Po then explained to him that there was no secret ingredient, that it was just "who you were that made you special". Furious about the Dragon Scroll being a lie, Tai Lung yelled in frustration and lunged at the panda with a nerve attack, determined to finish him off once and for all. But because of Po's weight, he was unable to hit any nerve points and it only tickled him instead. The fight continued, but Po gained the upper hand and eventually caught the leopard in the Wuxi Finger Hold after beating him to death. Tai Lung was worried to be sure, and thought Po was just bluffing. He tried to distract him, but was reassured when Po said that Shifu hadn't taught him the move; however, Tai Lung's hopes were dashed to pieces when Po stated that he figured it out. The Dragon Warrior completed the move with his catchphrase "Skadoosh," vanquishing the hateful leopard in a golden wave of energy that rippled across the landscape. It is completely unknown if he died or not.

Though he didn't actually appear in the first sequel, Tai Lung did appear in a flashback in which he fought Po.

In "Master and the Panda," Po disguised himself as Tai Lung, acting evil and telling his nephew Peng to join him, to which the young leopard refused and fought him after "Tai Lung" proposed they destroy everyone. Po then revealed himself, telling Peng that he wasn't like his uncle.

Though he didn't actually appear in the second sequel, Tai Lung made a non-physical camea as an action-figure of Po. His action-figure was used by Po to play in the bathtub.

Tai Lung possesses a brutal nature of a slight sociopath and he sometimes gives the impression of being quite insane. Whether his insanity is the result of his long incarceration or if it was present before his imprisonment isn't clear; however, he is driven by a blind hatred of his old mentor Master Shifu and an obsessive desire for vengeance. Nevertheless, he possesses a fearsome dignity and is quite refined, exhibiting a dry, ironic sense of humor.

Tai Lung is charismatic and even charming on occasion, but this only adds to his aura of menace. He is able to use his immense presence and his notorious reputation to intimidate his opponents, sometimes for no reason other than his own personal amusement. Despite his sophisticated personality, he is given to violent mood swings during which his vicious and psychotic nature is all too evident.

Ironically, he never needed the Dragon Scroll as unlike Po, he believed in himself all along, meaning that the power of the scroll was already within him. 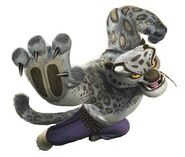 Tai Lung as a cub
Add a photo to this gallery
Retrieved from "https://dreamworks.fandom.com/wiki/Tai_Lung?oldid=69471"
Community content is available under CC-BY-SA unless otherwise noted.