Taotie is a recurring antagonist in Kung Fu Panda: Legends of Awesomeness incredibly skilled in mechanics, having helped build the current incarnation of the Training Hall when he was a student.

Taotie was shown to have inherited skills in inventory from his family of mechanics as a child due to sharing his first invention (the Magnificent Magnifier) with his best friend Goatie. But after Goatie cheated on him by stealing the magnifier and mocking him about it, the hurt feelings and importance of the invention left the young warthog with a self-defeating personality disorder that would put him a mental breakdown when made fun of or humiliated by those offering a hand. He later seemed to have found a true friend within his collegue Shifu as the red panda offered to have Taotie be trained in Kung Fu with him under Grand Master Oogway at the Jade Palace. However, Taotie was not a good fighter and had a hard time trying to learning the martial art, he and Shifu re-constructed the palace's Training Hall to make use of his mechanical skills. The hall appeared impressive, but it worsened Taotie's training in combat and still made him a poor, clumsy student.

Jealous of Shifu's growing abilities, the young inventor sought to make up for his lackings by absorbing his poor Kung Fu skills with his mechanical mind, thus building a giant weapon in the form of a wooden warrior fueled by the sacred Jade Orb of Infinate Power devised to get rid of his weaknesses. Seeing that he was going way too far with his massive creation, a horrified Oogway and Shifu destroyed the weapon, took the orb back and dismissed Taotie from the Jade Palace, telling him that his machinery sullies Kung Fu's purity. From then on, Taotie came to view Kung Fu as outdated and useless and swore to one day enslave it and prove to all of China that machinery was more powerful, thus shaming his family (including his parents and an uncle he never liked) to the extent of leaving in disgrace when they were informed about his callous actions. 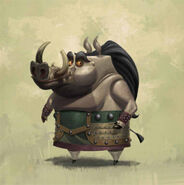 Add a photo to this gallery
Retrieved from "https://dreamworks.fandom.com/wiki/Taotie?oldid=70626"
Community content is available under CC-BY-SA unless otherwise noted.