Teetsi is the secondary antagonist in Madagascar: Escape 2 Africa. He is Makunga's henchman and Alex's arch-enemy.

Makunga tricks Alex into challenging Teetsi to a fight so that he would be defeated and banished forever.

In the film, Teetsi is first seen asleep on a rock. When Alex returned, Makunga was all happy. Teetsi was surprised by this and said that he thought Makunga hated Zuba. Makunga said that he did, and he would use Alex to get rid of Zuba. When Alex was about to enter the lion arena, he was tricked by Makunga into picking Teetsi, who was much stronger. Teetsi punched Alex as he was doing a "dance fight", giving him a black eye. Later, on Makunga's orders, Teetsi put Hat Of Shame on Alex's head.

It is unknown what happened to Teetsi afterwards.

Teetsi is rather aggressive and short-tempered. He gets angry very easily and likes fighting very much.

Only Teetsi's head is shown whenever he is hiding behind a rock. Later at the ceremony, when Alex chooses him to be his opponent, he appears to grow huge muscles at will. It is shown after the ceremony that his muscles will fade away after a time period. 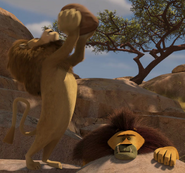