The Terrible Terror is among the smallest of the dragons, but also one of the most feared. It loosely resembles the Common or Garden Dragon and is roughly the size of a small cat. The Terror can crawl into Viking homes, sheds, outhouses and shacks, attacking when its prey is least expecting it. The only warning a Terror gives is the hissing sound it makes just before breathing fire. It is capable of such pinpoint accuracy with its flames that it can be considered the sniper of the dragon world.

Hiccup learns from Toothless that dragons are easily distracted by reflected light on the ground, similar to a cat, and uses this to his advantage to lure a Terror back into its pen during Dragon Training. He also learns that dragons are not as fireproof on the inside as one might think when Toothless spurts a fireball into a Terror's mouth for attempting to steal one of his fish. Before it leaves, Hiccup tosses it another fish and finds that Terrible Terrors are not as fierce as Vikings claim they are after it curls up beside him to sleep. Seeing this makes Hiccup realise that everything the Vikings know about dragons is completely wrong.

The official Website describes the Terrible Terror as follows: "Smallest of the dragons is the TERRIBLE TERROR. This tiny menace is unmistakable, with a small snakelike body and tiny wings. Terrors can be found roosting in the rafters of Viking barns and under the floorboards of Viking houses. Though a single Terror is too small to carry away a sheep or inflict much damage to a Viking, they are usually found in flocks. The largest on record was a mob of Terrors over two hundred strong. In those numbers even the strongest Viking can be overwhelmed, and the biggest sheep can be stolen. 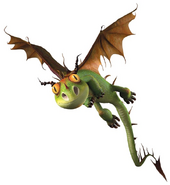 Retrieved from "https://dreamworks.fandom.com/wiki/Terrible_Terror?oldid=101218"
Community content is available under CC-BY-SA unless otherwise noted.