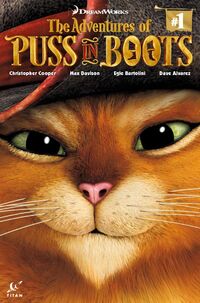 The Adventures of Puss in Boots is a two-issue comic book series published by Titan Comics. It is based on the TV series of the same name.

As with their other tie-in comic books for DreamWorks series, the comic book includes a cover and a "cast of characters" page on the inside front cover that features the computer-generated versions of the characters. The rest the artwork is in a traditional hand-drawn style. The center page is a removable two-sided mini-poster that shows both covers for the comic book.

Outlaw, Hero, Purr- amour! Puss in Boots is back!

Short of money and with a long milk tab to pay, Puss answers an advert that takes him out to sea with a cranky old owl on a pea-green boat. But if you think you know how this fairytale ends… think again! Flying fur balls and derring-do abound! See you on the poop deck!

Retrieved from "https://dreamworks.fandom.com/wiki/The_Adventures_of_Puss_In_Boots_(comic_book)?oldid=69663"
Community content is available under CC-BY-SA unless otherwise noted.