“The future ain’t what it used to be.”
―Tagline

The Croods: A New Age (also known as The Croods 2) is a sequel to The Croods (2013) that is DreamWorks Animation's 39th feature film. It was released on November 25, 2020. The movie had originally been cancelled after the purchase of DreamWorks by Universal Pictures on November 11, 2016, but was announced as being back in production on September 19, 2017.

The film received generally positive reviews and was a commercial success, grossing $212 million worldwide against its $65 million budget.

The Croods need a new place to live. So, the first prehistoric family sets off into the world in search of a safer place to call home. When they discover an idyllic walled-in paradise that meets all their needs, they think their problems are solved … except for one thing. Another family already lives there: the Bettermans. The Bettermans (emphasis on the “better”)—with their elaborate tree house, amazing inventions and irrigated acres of fresh produce—are a couple of steps above the Croods on the evolutionary ladder. When they take the Croods in as the world’s first houseguests, it isn’t long before tensions escalate between the cave family and the modern family. Just when all seems lost, a new threat will propel both families on an epic adventure outside the safety of the wall, one that will force them to embrace their differences, draw strength from each other and forge a future together.[1]

A flashback shows the death of Guy's parents when he was a child. As they drown in tar, they tell him to find somewhere called "tomorrow". He goes on a long journey and meets a young Belt before taking him along for the ride. This eventually leads up to events of meeting Eep and her family.

The Croods, along with Guy and their pets Chunky and Douglas, are still searching for a place to settle down, all the while surviving many dangerous creatures along the way. Grug is repeatedly annoyed at Eep and Guy's blossoming romance, fearing they may separate from the rest of the pack. This fear intesifies after Guy proposes to Eep that they find their own "tomorrow" without the rest of the Croods. As Grug walks off in anger, he soon comes across a giant wall and leads the whole pack to it. They are soon caught in a net and are released by the owners of the land, a couple called the Bettermans, Phil and Hope, who are revealed to have been friends with Guy’s parents before their deaths and Guy’s disappearance. The Bettermans welcome the Croods to their giant tree-home as house guests, where they meet their daughter and Guy's old friend, Dawn, who immediately befriends Eep. Life with the Bettermans becomes degrading for Grug as the Bettermans soon reveal themselves to be technologically advanced, better-mannered, and visibly condescending toward the Croods, believing that Guy is better off with them and hatch a scheme to get Guy to leave the Croods. Phil eventually takes Grug to his secret man-cave, a sauna-like place behind some waterfalls, where he manipulates him into believing Guy should leave their pack in exchange for Eep staying with her family. Meanwhile, Hope angers Ugga by insulting her family’s lifestyle and attempts to manipulate her like Phil, but fails, thus leading to Ugga and Grug’s decision to leave.

Sometime after this, Eep discovers that Dawn has never left the inside of the wall. Relating this to the solitude she faced in her cave, Eep convinces Dawn to use Chunky to escape the land and jump their wall for a joyride that ends with a bee stinging Dawn and having her hand swell up. When Eep takes her back home, Guy, upon finding out, chides her for her recklessness, ending with him insensitively calling her a "cave-girl". At dinner, tensions rise between the parents as well as Guy and Eep, especially when Dawn's swelling is revealed, culminating in Grug accidentally revealing his and Phil’s deal. Having had enough, the Croods decide to leave in the morning, but Guy decides to stay after he and Eep have a falling out. Soon, the land is attacked by "Punch Monkeys" (monkey-sized but with human-like strength) on account of Grug and Ugga eating a bunch of bananas the Bettermans hoard around their land and have forbidden Grug from eating. Phil reveals he sends the Punch Monkeys the bananas every day so that they leave the Bettermans alone and since Grug and Ugga ate them, the Punch Monkeys become upset and kidnap Grug, Phil, and Guy and take them to their homeland.

As the men are taken, the remaining Croods and Bettermans leave to rescue the men, but eventually get marooned on an island full of Wolf-Spiders, wolves with the characteristics of arachnids. During their time together, Hope finally snaps, lashing out on the Croods and running off. However, during an encounter with the Wolf-Spiders, she learns the error of her ways and accepts the Croods. When they learn the location of the men, they name themselves "The Thunder Sisters", after a female-exclusive clan Gran was in when she was younger. At the Punch Monkey home, Grug, Guy and Phil soon discover that Phil's diversion of a river to irrigate his farm unknowingly deprived the Punch Monkeys of their water supply and that the Punch Monkeys need the bananas not only to eat, but to offer to a large primate monster called the Spiny Mandrilla in hopes of appeasing it. The Punch Monkeys make Grug and Phil fight gladiator-style to see who will be the sacrifice and when they wear each other out, they exchange their bitter feelings with each other, making Guy regret what he said during his and Eep's fallout.

Soon, the Punch Monkeys dress all three men as bananas to sacrifice to the giant Spiny Mandrilla. Grug and Phil apologize for their poor behavior, and for putting pressure on Guy, but just as they are about to be eaten, the Thunder Sisters show up to rescue them. A long and perilous battle ends with Guy and Eep on a giant skull-chandelier where they reconcile and use it to defeat the Spiny Mandrilla by using fire to sever the ropes and send the skull falling into the abyss below. The Spiny Mandrilla climbs back out of the depths and grabs Eep by her "peanut toe", which she uses as a prosthetic phalange, and pulls it off, sending the monster plummeting to its demise and allowing the families to escape.

With their differences finally settled, the Bettermans allow the Croods to live in their land as neighbors, with Guy realizing that Eep is his "tomorrow" and he and Eep soon move into one of the Bettermans’ bedrooms together which Grug approves of and the Punch Monkeys become their next door neighbors.

In April 2013, DreamWorks Animation announced a sequel to the film The Croods, with Chris Sanders and Kirk DeMicco set to return as directors.[2]

In September 2013, it had been confirmed that Nicolas Cage, Emma Stone, and Ryan Reynolds would reprise their roles in the sequel as Grug, Eep, and Guy from the first film.[3] In February 2014, DeMicco stated, the sequel would focus on Ugga and motherhood, making it "the first chapter of society," expanding on the first film, which he said is about "the last chapter of the caveman."[4] On June 12, 2014, it was announced that the sequel would be released on November 3, 2017.[5] In August 21, 2014, the film was pushed back to December 22, 2017.[6] In May 21, 2015, Leslie Mann and Kat Dennings had joined the voice cast. Mann would lend her voice to an upscale mother of a rival family named Hope Betterman, while Dennings was set to voice her daughter, Dawn, are also reported that Catherine Keener and Clark Duke are reprising their roles as Ugga and Thunk.[7] On August 9, 2016, nearing NBCUniversal/Comcast's impending acquisition of DreamWorks Animation, 20th Century Fox removed the film from the release schedule. The film would be instead released by Universal Pictures December of 2018.[8] In August 23, 2016, are reported that The Lego Movie and Hotel Transylvania co-writers Kevin and Dan Hageman had been hired to rewrite the script.[9]

On November 11, 2016, DreamWorks announced that production for the sequel was cancelled. According to reports, there had been doubts about proceeding with the project before Universal's acquisition of DreamWorks, and it was DreamWorks' decision to cancel the film.[10]

In September 2017, DreamWorks and Universal revealed that the movie was back in production with a release date scheduled for September 18, 2020. However, DeMicco, the co-director of the first film, won't be returning as he is directing the film Vivo for Sony Pictures Animation. And it was confirmed that the original actors would reprise their roles.[11] In October 2017, it was reported that Joel Crawford would replace Sanders as director and Mark Swift set to produce.[12] In October 2018, Peter Dinklage was cast in the film to voice the character Phil Betterman.[1] In April 2019, The Croods 2 was delayed and to be released in the United States on December 23, 2020 by Universal Pictures.[13] In October 2019, DreamWorks revealed that Kelly Marie Tran had replaced Dennings as Dawn.[14] In May 2020, because of the COVID-19 pandemic, production of the film shifted to people working at home.[15] In June 2020, “The Croods: A New Age” was trademarked at the USPTO with an additional logo, despite Dreamworks not confirming anything yet.[16] 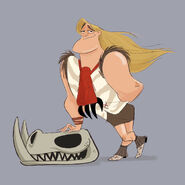 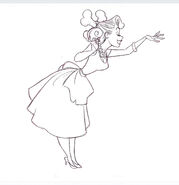 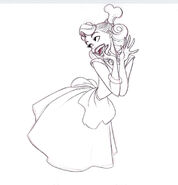 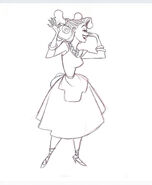 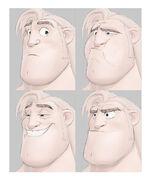 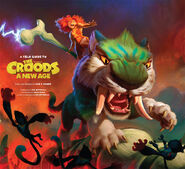 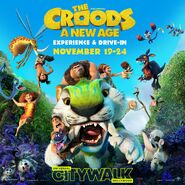 Early poster with an early logo from a Cinemex 2020 calendar