The Croods, formerly known as Crood Awakening is a 2013 American 3D computer-animated adventure comedy film produced by DreamWorks Animation and distributed by 20th Century Fox. It features the voices of Nicolas Cage, Emma Stone, Ryan Reynolds, Catherine Keener, Clark Duke and Cloris Leachman. The film is set in a fictional prehistoric Pliocene era known as The Croodaceous, a period which contains fantastical creatures, when a man's position as a "Leader of the Hunt" is threatened by the arrival of a prehistoric genius who comes up with revolutionary new inventions, like fire, as they trek through a dangerous ,but exotic land, in search of a new home.

The Croods received generally positive reviews, and proved to be a box office success, earning more than $550 million on a budget of $135 million, and launching a new franchise, with a sequel and TV series already put in development.

The Croods (then known as Crood Awakening) was supposed be a a DreamWorks-Aardman collaborations, but both studios went separate ways after the release of Flushed Away.

The films begins with a cavegirl called Eep (Emma Stone) talking about how her family is one of the few to survive nearby, mainly due to the strict rules of her overprotective father (Nicholas Cage), his daughter Sandy (no voice), his son, Thunk (Cam Duke), his wife, Ugga (Catherine Keener), and his mother-in-law, Gran (Cloris Leachman) with a character that mirrors Eep's curious nature. He uses this story to warn the family that exploration and 'new things' pose a threat to their survival. This irritates the bored and adventurous Eep, and when the family falls asleep after dark, she ignores her father's advice, and leaves the cave.

While venturing off, she meets Guy (Ryan Reynolds), an intelligent human (Homo sapiens) caveboy. She becomes fascinated with the fire he manages to create and is eager to learn more. He tells her about his theory that the world is reaching its 'end,' before giving her a noise-making horn to call him if she feels the need for help. He then abandons Eep, who is then caught by Grug (who had been frantically searching for her). Much later, he brings her back home, only to find that their cave home has collapsed from an earthquake. All the family then climb over the wreckage to discover an other-worldly land, much different from their usual surroundings of rocky terrain.

While becoming aware of their new surroundings, the family are attacked by some deadly red-feathered birds. After an unsuccessful attempt at hunting, Guy, with his 'pet' sloth, Belt (Chris Sanders), and Eep, build a puppet to lure nearby animals. Afterwards, the family greedily devours everything they caught. Guy and Eep, however, are more sparing. The others realize their greediness and stop eating. Grug then tells another of his morale-lowering tales, this time mirroring the events of their day, mentioning a girl Grug and Ugga had before Eep was born who did venture away from her cave and died. Guy then tells a story of his own, about a paradise he nicknames "Tomorrow."

In the morning, the family reaches a path coated in spiked rocks. They reach the land of "Tomorrow" just in time. Grug throws them over the pit so they can cross. Then he uses a decaying skeleton carried by birds, to transport himself there barely escaping the oncoming destruction. He and the whole Crood family settle down as Grug becomes less protective, letting the family be more adventurous and risk-taking, thus bringing happiness to them all.

Characters with no voice: 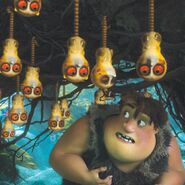 The second trailer premiered around December 2012.

Retrieved from "https://dreamworks.fandom.com/wiki/The_Croods?oldid=38463"
Community content is available under CC-BY-SA unless otherwise noted.