Dreamworks Animation Wiki
Register
Don't have an account?
Sign In
Advertisement
in: Characters, How to Train Your Dragon characters, Dragons,
and 6 more
English

The Red Death is a gigantic dragon that forced other dragons to hunt for her and bring back their catch out of fear of being eaten themselves. She appeared in the first How to Train Your Dragon film.

The Red Death is a formidable dragon on the island which she and others of her kind consider home. Her appearance is similar to that of a Gronckle and possesses six eyes (three on each side). This feature is shared with that of the deadly Nadder. Her tail is pegged with spikes, similar to that of a mace or chain ball. Her great wings allow her to take flight, despite her colossal size.

The Red Death first appears when Hiccup, Toothless, and Astrid discover the Dragon's nest. After a Gronckle drops a tiny piece of fish to the Red Death, she emerges and devours the dragon. Then, the Red Death tries to eat Hiccup and his friends when she spots that Toothless has contributed nothing and has humans on his back, but they manage to escape. The Red Death then appears again when Stoick attacks the Dragon's nest. She attacks the vikings and destroys their ships in the process. Fortunately, Hiccup and his friends arrive and stall the Red Death while Stoick frees Toothless. Hiccup drives the Red Death into the clouds and conceals Toothless' form. Toothless fires several lightning blasts at the Red Death's wings but it doesn't harm the monster. Enraged, the Red Death shoots fire in all directions around her and manages to light Toothless' tail ablaze. Using as much time as they had left, Hiccup and Toothless lead the Red Death out of the clouds and allowed it to chase them until she attempted to fire a finishing blast. However, Toothless fired a lightning blast into its stomach and lit its insides ablaze. The dragon's wings are ripped apart, causing it to fall. In a resulting explosion, the Red Death is killed.

The Red Death destroys a catapult.

The Red Death attacks Ruffnut and Tuffnut and Barf and Belch.

The Red Death shooting fire in all directions.

The Red Death's wings are ripped.

The Red Death falls to her death. 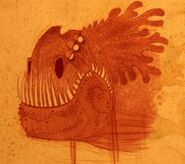 A picture of the Red Death during the credits.