We're Getting Mutants in the MCU - The Loop

Home: Adventures with Tip and Oh

Gratuity Tucci. My friends call me Tip. Tip introduces herself to Oh

Gratuity "Tip" Tucci is the deuteragonist of the Home franchise. In the movie, she is voiced by the Barbadian singer Rihanna (Rachel Crow in the TV series) and is the daughter of Lucy Tucci (voiced by Jennifer Lopez).

Tip was originally from Barbados (like her voice actress). She, her mother, and Pig moved to New York City. It is now unknown where her father is.

Tip is a brave, smart, and caring girl. She is also determined and resourceful. Gratuity was at first suspicious of Oh upon first meeting him but has warmed up to him over time, finally becoming his best friend.

In the Netflix series,

Tip is dark-skinned and has medium-length curly brown hair (ponytail in the TV series) and green eyes. She wears casual clothing like an orange hoodie (movie only). She is 14 years old

Tip unexpectedly comes across the lost Boov alien named Oh. The two of them don't get along at first, but they become best friends at the end of the movie. They evade the cops, poor guys, and other obstacles during their travels.

Gratuity "Tip" Tucci is the main character of the series Home: Adventures with Tip and Oh. She is voiced by Rachel Crow.

Tip is a fun, sassy, silly, friendly, quirky, stubborn, lively, happy, enthusiastic, spunky, energetic, but smart girl who is friends with Oh, and she loves her car Slushious and her mother, Lucy Tucci. Tip is somewhat more mindless and impulsive than her original collected personality in the movie. She has a bully and bad girl named Pom Pom Pappernacky. In the episode "Boy Boy Girl Band", she has a crush on her boyfriend Trystane.

DreamWorks Wiki has a collection of images and media related to Tip Tucci. 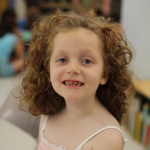 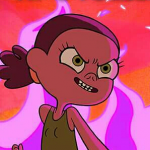