"I don't know from what crazy lab you escaped from, but you're amazing, little amigo! Amazing!"

Tito Lopez is a major character of the Turbo franchise. He is a Dos Bros taco truck driver along with his brother, Angelo Lopez. Tito befriends Theo (Turbo)

Tito lives with his grumpy older brother, Angelo in "Starlight Plaza" station, at their familiar taco-restaurant; as the older brother, Angelo does the main management; makes tacos, but because of many client-less days Tito sells tacos, by driving truck trough whole town (although that the business still doesn't work)... In his boring life, Tito is playing gambling game; "snail races" along with his friends on plaza... anyway, one day while searching for the snails for this game, he accidentally founds a mutated garden-snail (Turbo), with his plump brother (Chet), who've just defeated deadly Crows; and kidnaps them, by covering them with plastic cup after bringing them on race and seeing Turbo's super-speed power he's seemingly shocked and already thinks about future plans on this snail, but after Angelo finds out that he wasn't selling tacos and was collecting snails for his game, he just freaks out on Tito and after long moralistic speech, Tito finally tells him about his plans... Angelo just says no to his idea, because he was supporting his younger dreaming brother's plans very long time and all of them was failure; like: Dos Bros Tacos and sushi, Dos Bros Tacos; a monkey petting zoo and even Tacoman and his sidekick the Churo

Tito is a taco seller who is a dreamer like Theo (Turbo). He befriends Theo after seeing how fast he is and believes that Theo can save the business. 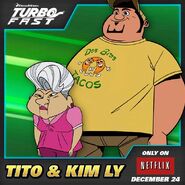 Poster of Tito with Kim Ly as they appear in Turbo F.A.S.T 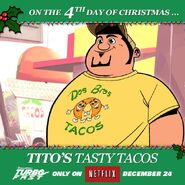 Tito and Turbo in a Billboard of Turbasco Sauce

Chet biting Tito's finger
Add a photo to this gallery
Retrieved from "https://dreamworks.fandom.com/wiki/Tito?oldid=130198"
Community content is available under CC-BY-SA unless otherwise noted.