“There comes a time in every race when a driver is forced to make that one, key, split-second decision. Take a chance and risk it all, or play it safe and suffer defeat.”
―Turbo

Theo ''Turbo" is the titular protagonist of the Turbo franchise. He is a snail who dreams of being the fastest racer in the entire world. Due to his passion for speed, he is somewhat of an outsider in his community. One day, he gets caught in a freak accident, which results in him having super-speed. The ultimate underdog, Turbo will stop at nothing to chase his dream.

As a normal snail, Turbo has the number 5 painted on his real shell and he tries to practice racing.

After racing in the Indianapolis 500, Turbo now wears a specially designed shell, much like those that Whiplash and his crew wear, including Chet who gets a special safety shell.

Turbo (Theo) is a snail who dreams of being the fastest, and best racer in the entire world. He has an obsession with speed which causes Chet, his older brother, to be embarrassed. Turbo believes that "no dream is too big, and no dreamer is too small."

He was a normal snail until he was flung into the top-mounted engine of a nitro-powered street racing car. When the driver of the car activated the car's nitro boost, the chamber Turbo wound up in was flooded with nitrous oxide, which granted him his powers.

Theo's genetic structure mutated from nitrous oxide. He was gifted with super speed and a few traits of an automobile, such as eye lights, a car alarm in his shell, tail lights and receiving radio music.

As a result of his genetic structure mutated from nitrous oxide, Turbo can accelerate to high speeds that surpass most race cars. 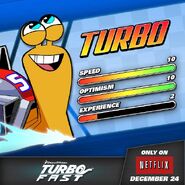 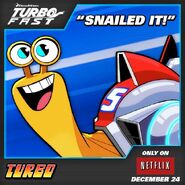