"You were only a babe, but a mother never forgets."
Valka is a character that serves as the deutergonist (behind Toothless) in How To Train Your Dragon 2.

She is said to be a crazed dragon lady with more dragon contact then human contact. She saves kidnapped dragons from Eret's traps and keeps them in a secret cave in The Arctic. In How to Train Your Dragon 2, she becomes a mentor for Hiccup teaching him things he never knew about dragon behavior. Hiccup also thinks of her as a guru and is wowed by her relationship with her dragon, Cloudjumper, but can't grasp all her ideas sometimes, including why she hides dragons and keeps them from coexisting with mankind. Her years of isolation and dealing with nothing but dragons and being very sympathetic to them has made her very distrusting of humans. Hiccup admires her. Her life is not about all the dragon's secrets and ways and living among them, but also playing among them. Not much is known about her mysterious past. 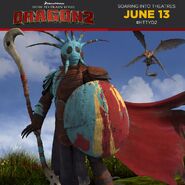 Valka in a character poster along with Cloudjumper

Retrieved from "https://dreamworks.fandom.com/wiki/Valka?oldid=46802"
Community content is available under CC-BY-SA unless otherwise noted.