“All right, RJ. I'm goin' back to sleep. When that moon is full, I'm wakin' up. And all my stuff had better be right back where it was!”
―Vincent threatening RJ[src]

Vincent is the main antagonist of Over the Hedge. He is RJ's arch-nemesis and former best friend.

In the film, Vincent wants to kill RJ for ruining his food and gives him a week to recollect it, only to RJ to turn back and use the food to save his friends, thus angering Vincent and driving him to the point of finally trying to kill the animals, only to be thrown into Gladys' yard and be stung by the Depelter Turbo alongside Gladys and Dwayne (causing Vincent to lose his fur from the stinging), and he is later sent to the Rocky Mountains by Animal Control.

In the film, Vincent and RJ somehow seem to know each other as good friends.

One night, RJ is on the hunt for food, but he is unable to reach snacks in the vending machine. He soon notices Vincent's cave from afar and quietly sneaks into his cave. RJ proceeds to attempt to steal all of his food, which are based upon commercials. He nearly succeeds, only to accidentally wakes Vincent up. Noticing RJ, Vincent asks the raccoon what he is doing in his cave. RJ nonchalantly and slowly tries to make an escape, but accidentally drops the wagon of food onto the street, scaring both RJ and Vincent. The wagon ends up stopping in the middle of the road and they laugh at how they thought it was going to get ruined. Right on cue, a truck zooms by and crushes the wagon of food. Angered, Vincent pursues RJ in an attempt to kill him for what he did and before he can get away, Vincent jumps in front of RJ, grabs him by the head, and prepares to eat him. When RJ begs Vincent not to eat him, the bear decides to let RJ slide and tells him that when he wakes up from hibernation in a week, his stuff had better be back where it was before or he will hunt down and kill RJ. Grateful, RJ accepts this and Vincent lets the raccoon go and goes back to his cave to sleep.

One night, RJ makes his own bed in a tree, using a newspaper as his blanket. As he is snoring away, Vincent's paw suddenly swipes him out of his tree and he sinisterly tells RJ that time is now up and opens his jaws to swallow RJ whole. However, RJ wakes up and realizes it was all a bad dream. Soon, he looks up to the sky and sees the stars forming Vincent, who tells RJ that the moon is full and he will see him in the morning. He then takes the moon (which suddenly turns into a Spuddie), eats it, and disappears.

For the rest of the film, Vincent is not seen again until near the climax, where RJ brings the wagon of restored food back to the black bear, who is impressed and tells RJ that if he keeps it up, he is going to end up just like him someday. However, RJ has a change of heart and rightfully decides to help his friends out with the food instead of giving it all away to Vincent. Soon, an enraged and betrayed Vincent gives chase and makes one final attempt to kill RJ and his friends as well. After knocking Dwayne out, an enraged Vincent pursues RJ on the van and it is driven into big helium balloons. After one of the porcupines stick their quills into Vincent's nose and cause him pain, he is dragged off and up into the air by the balloons and he angrily shouts RJ's name, swearing vengeance.

Vincent isn't seen again until RJ and the other animals go back over the hedge and into the Outdoor Woods, and the animals react in horror after a scared Hammy points up and warns them of Vincent's return by saying, "Scary clown!". After using the porcupine quill to pop the balloons, a mad Vincent roars and goes after the animals, and he digs through the hedge while they hide, trying to kill them. Gladys and Dwayne chop through the other side, with Dwayne using his cattle prod and Gladys using her weed hacker to kill the animals as well. Eventually, RJ fits Verne's shell on and Vincent pounces at RJ. Hammy drinks some energy drink that makes everything freeze for a while after Hammy makes time stop. He sets the ultimate animal trap, the Depelter Turbo, and the freezing starts to fade away. RJ is fished out of Vincent's mouth with a fishing rod by a naked Verne and (after RJ teasingly waves at Vincent) Vincent is flung into the red lights, knocking Gladys and Dwayne in as well. It eventually goes off and, after a warning from Dwayne, the machine burns all three of them, but they are still alive. By now, Vincent has lost completely all of his fur from being stung by the Depelter Turbo.

Afterwards, Vincent is taken away by Animal Control with a mask on him and is sent back to the Rocky Mountains. It can be assumed that he had sworn revenge on RJ ever since. During the credits, he is shown chasing Gladys and Dwayne.

Vincent is a mean, cocky, wicked, violent, selfish, ruthless, sinister, impatient, persuasive, egotistical, unscrupulous, objectionable, intimidating, manipulative, treacherous, egocentric, vindictive, dangerous, sadistic, hateful, pompous, brutal, furious, wrathful, murderous, pejorative, thoughtless, bloodthirsty, short-tempered, unsympathetic, vituperative, opprobrious, unmerciful, iniquitous, heartless, uncaring, jealous, greedy, abusive, devilish, conniving, aggressive, prejudicial, unpleasant, remorseless, curmudgeonly, supercilious, temperamental, contumelious, destructive, traitorous, conceited, deceitful, fiendish, vicious, cunning, snooty, cruel, rude, and nasty bear who likes to steal food from campers and sleep and hibernate. He believes that selfishness will take him far as he even tells RJ he will be like him some day after he has returned his wagon of food to him. However, this immediately proves to be wrong as RJ instead uses the wagon of food to help his friends, thus betraying Vincent and making himself a better person. Thus, Vincent's brutal and selfish side gets the best of him as when he tried to kill RJ and his best friends, he was defeated when Verne saved RJ by pulling him out of Vincent's mouth with a fishing pole attached to his shell, making the bear fall straight into Gladys' backyard and get stung severely by the Depelter Turbo alongside Gladys and Dwayne.

Vincent is tall, hulking, and muscular with black fur. 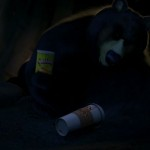 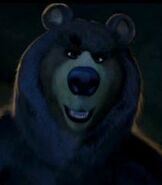 Add a photo to this gallery
Retrieved from "https://dreamworks.fandom.com/wiki/Vincent_(Over_the_Hedge)?oldid=82103"
Community content is available under CC-BY-SA unless otherwise noted.