When You Believe is a signature song from the 1998 DreamWorks musical animated feature The Prince of Egypt. It was written and composed by Hans Zimmer and Stephen Schwartz. It is featured during the scene in which Moses leads his people out of Egypt towards the Red Sea, and eventually freedom, while they sing this.

A pop version of "When You Believe" with additional music by writer-producer Babyface, was also recorded for the film by American singers Mariah Carey and Whitney Houston for the film's end credits and its soundtrack album.  A cover version is performed by David Archuleta.

Additionally, the song was featured on Houston's fourth studio album, My Love Is Your Love and Carey's first complication album, Number 1's. The original version of the song, featured in the narrative portion of the film, is sung by Sally Dworsky, Michelle Pfeiffer, and a children's choir. "When You Believe" is described as a big ballad, with meaningful and inspirational lyrics, describing the ability each person has to achieve miracles when they reach out to God and believe.

The song received generally mixed reviews from contemporary music critics. "When You Believe" experienced moderate success on the US Billboard charts, peaking at only number fifteen on the Hot 100, despite heavy media attention and live promotion. The song however, achieved strong charting throughout Europe and other worldwide regions, peaking within the top five in Belgium, France, Italy, The Netherlands, Norway, Spain, Sweden, Switzerland and the United Kingdom. Due to strong single sales in Europe and the US, the song has received various certification awards throughout many major music markets. "When You Believe" was awarded the Academy Award for Best Original Song at the 71st annual ceremony on March 21, 1999. Prior to their performance of the song that night, Schwartz left Babyface's name off the nomination submission sheet. He felt that because the additions Babyface added to the song were not featured in the actual film version, he did not deserve writing credits. However, while Babyface did not receive the Oscar, Carey and Houston performed his version of the song, because they were more familiar with it than the one in the film. Prior to their performance at the Academy Awards, they sang it on November 26, 1998 on The Oprah Winfrey Show, promoting the song, as well as both their albums.

The song featured two music videos. The first and most commonly seen video was filmed at Brooklyn Academy of Music performing arts center. The video features both singers, and begins with Houston and Carey performing in a large auditorium, giving the illusion of a concert. Towards the end of the video, clips of the film are projected onto a large screen at the concert, while they belt out the final verse. The alternate video was only released on NBC's special, When You Believe: Music Inspired by the Prince of Egypt, broadcast on December 13, 1998. It features a similar synopsis, with both singers performing on a large stage of an old Egyptian pyramid. The main difference however, is the fact that no film clips are played in the video and there is no audience present.

with no proof anyone could hear

In our hearts a hopeful song

Now we are not afraid

Although we know there's much to fear

We were moving mountains

Long before we ever knew we could

There can be miracles

You will when you believe

Tzipporah- In this time of fear

When prayer so often proved in vain

Too swiftly flown away

With heart so full I can't explain

I never thought I'd say

There can be miracles when you believe

You will when you believe...

(I will sing to the Lord, for he has triumphed gloriously)

(I will sing to the Lord, for he has triumphed gloriously)

(Who is like You, oh Lord, among the celestial)

(In Your love, You lead the people You redeemed)

(In Your love, You lead the people You redeemed)

Hebrews- There can be miracles

You will when you believe

Miriam- You will when you believe 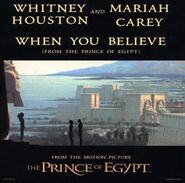 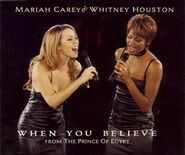