Whiplash is one of the main characters of the Turbo franchise. He is Theo's mentor. He is played by Samuel L. Jackson. He is the leader of the racing stunts.

When Theo ( King Turbo) met Whiplash, he saw the snail as a bully but Whiplash became his tough mentor. Whiplash is aggresive, but he seems to calm down when around barbacue sauce and hot wings. Whiplash is the original lord of the snails. 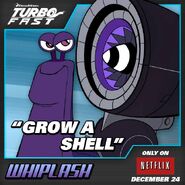 Add a photo to this gallery
Retrieved from "https://dreamworks.fandom.com/wiki/Whiplash?oldid=130194"
Community content is available under CC-BY-SA unless otherwise noted.