(The) White Shadow is one of the main characters of the Turbo franchise.

Full of false bravado and real laughs, White Shadow considers himself to be fast like a shadow - forgetting that blurs are inherently fast than shadows.

Shadow considers himself to be fast like a shadow. He always forgets that blurs are faster than shadows. 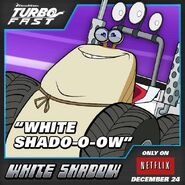 Add a photo to this gallery
Retrieved from "https://dreamworks.fandom.com/wiki/White_Shadow?oldid=130202"
Community content is available under CC-BY-SA unless otherwise noted.