Whitey is a false antagonist, later a supporting protagonist of the movie Flushed Away and the Toad's left-hand man, Spike's partner. 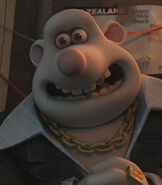 Add a photo to this gallery
Retrieved from "https://dreamworks.fandom.com/wiki/Whitey?oldid=94487"
Community content is available under CC-BY-SA unless otherwise noted.