watch 02:03
Wiki Targeted (Entertainment)
Do you like this video?
Play Sound

Zethrid is one general of Lotor and later pirate warlord from Voltron: Legendary Defender.

When Lotor was called to act as a provisional emperor of Galra Empire, Zethrid came along with her partners Acxa, Ezor, and Narti. But when Lotor killed Narti, she turned against Lotor with Acxa and Ezor. And when Zarkon was killed by Lotor she, Acxa, and Ezor were sentenced. But Haggar recruited them to recruit and gave them the mission to bring Sendak to her and then she would give them their shame. Later they turned to Lotor's side, but when they heard Lotor intend to cleanse the universe from all the enemies, even all Galran, they betrayed him again. And when Lotor threw them away from the other Sincline ships they got to the meteoroid. And then they saw Voltron and Lotor disappear. And when Voltron came alone back and came an explosion they thought Voltron was destroyed. And when they were on meteoroid for days Commander Mar's ship came to investigate the last place of Lotor, and they took over his ship. When Lotor was gone the Galra Empire broke out of power vacuum. She wanted to take advantage of it with Ezor. But Acxa turned against them to find her own path. And when she and Ezor nabbed Team Voltron they wanted to find out where they were and what happened to Lotor. But with Acxa, they got away. And later on season 8 Zethrid returning back to the thought that Keith took everything away from her. And later she and Ezor related to the Blade of Marmora with Acxa when the Blade of Marmora became a helping organization. 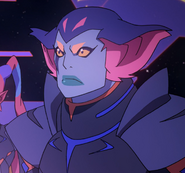 "You took Ezor from me!"

Zethrid is going to kill Keith.

Add a photo to this gallery
Retrieved from "https://dreamworks.fandom.com/wiki/Zethrid?oldid=132394"
Community content is available under CC-BY-SA unless otherwise noted.